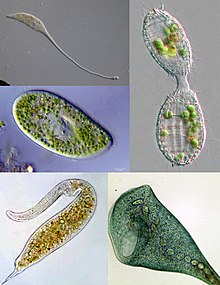 The ciliates are a group of protozoans characterized by the presence of hair-like organelles called cilia, which are identical in structure to eukaryotic flagella, but are in general shorter and present in much larger numbers, with a different undulating pattern than flagella. Cilia occur in all members of the group (although the peculiar Suctoria only have them for part of their life-cycle) and are variously used in swimming, crawling, attachment, feeding, and sensation.

Ciliates are an important group of protists, common almost anywhere there is water — in lakes, ponds, oceans, rivers, and soils. About 4,500 unique free-living species have been described, and the potential number of extant species is estimated at 27-40,000. [2] Included in this number are many ectosymbiotic and endosymbiotic species, as well as some obligate and opportunistic parasites. Ciliate species range in size from as little as 10 µm to as much as 4 mm in length, and include some of the most morphologically complex protozoans. [3] [4]

In most systems of taxonomy, "Ciliophora" is ranked as a phylum, [5] under either the kingdom Protista [6] or Protozoa. [7] In some systems of classification, ciliated protozoa are placed within the class "Ciliata" [8] [9] (a term which can also refer to a genus of fish). In the taxonomic scheme proposed by the International Society of Protistologists, which eliminates formal rank designations such as "phylum" and "class", "Ciliophora" is an unranked taxon within Alveolata. [10] [11] 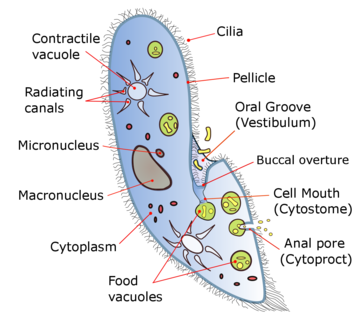 Unlike most other eukaryotes, ciliates have two different sorts of nuclei: a tiny, diploid micronucleus (the "generative nucleus," which carries the germline of the cell), and a large, polyploid macronucleus (the "vegetative nucleus," which takes care of general cell regulation, expressing the phenotype of the organism). The latter is generated from the micronucleus by amplification of the genome and heavy editing. The micronucleus passes its genetic material to offspring, but does not express its genes. The macronucleus provides the small nuclear RNA for vegetative growth.

Division of the macronucleus occurs by amitosis, and the segregation of the chromosomes occurs by a process whose mechanism is unknown. This process is not perfect, and after about 200 generations the cell shows signs of aging. Periodically the macronuclei must be regenerated from the micronuclei. In most, this occurs during conjugation. Here two cells line up, the micronuclei undergo meiosis, some of the haploid daughters are exchanged and then fuse to form new micronuclei and macronuclei.

Food vacuoles are formed through phagocytosis and typically follow a particular path through the cell as their contents are digested and broken down by lysosomes so the substances the vacuole contains are then small enough to diffuse through the membrane of the food vacuole into the cell. Anything left in the food vacuole by the time it reaches the cytoproct (anal pore) is discharged by exocytosis. Most ciliates also have one or more prominent contractile vacuoles, which collect water and expel it from the cell to maintain osmotic pressure, or in some function to maintain ionic balance. In some genera, such as Paramecium, these have a distinctive star shape, with each point being a collecting tube.

Cilia are arranged in rows called kineties. In some forms there are also body polykinetids, for instance, among the spirotrichs where they generally form bristles called cirri. More often body cilia are arranged in mono- and dikinetids, which respectively include one and two kinetosomes (basal bodies), each of which may support a cilium. These are arranged into rows called kineties, which run from the anterior to posterior of the cell. The body and oral kinetids make up the infraciliature, an organization unique to the ciliates and important in their classification, and include various fibrils and microtubules involved in coordinating the cilia.

The infraciliature is one of the main components of the cell cortex. Others are the alveoli, small vesicles under the cell membrane that are packed against it to form a pellicle maintaining the cell’s shape, which varies from flexible and contractile to rigid. Numerous mitochondria and extrusomes are also generally present. The presence of alveoli, the structure of the cilia, the form of mitosis and various other details indicate a close relationship between the ciliates, Apicomplexa, and dinoflagellates. These superficially dissimilar groups make up the alveolates.

Most ciliates are heterotrophs, feeding on smaller organisms, such as bacteria and algae, and detritus swept into the oral groove (mouth) by modified oral cilia. This usually includes a series of membranelles to the left of the mouth and a paroral membrane to its right, both of which arise from polykinetids, groups of many cilia together with associated structures. The food is moved by the cilia through the mouth pore into the gullet, which forms food vacuoles.

Feeding techniques vary considerably, however. Some ciliates are mouthless and feed by absorption (osmotrophy), while others are predatory and feed on other protozoa and in particular on other ciliates. Some ciliates parasitize animals, although only one species, Balantidium coli, is known to cause disease in humans. [12] 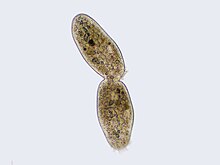 Typically, the cell is divided transversally, with the anterior half of the ciliate (the proter) forming one new organism, and the posterior half (the opisthe) forming another. However, other types of fission occur in some ciliate groups. These include budding (the emergence of small ciliated offspring, or "swarmers", from the body of a mature parent); strobilation (multiple divisions along the cell body, producing a chain of new organisms); and palintomy (multiple fissions, usually within a cyst). [14]

Fission may occur spontaneously, as part of the vegetative cell cycle. Alternatively, it may proceed as a result of self-fertilization (autogamy), [15] or it may follow conjugation, a sexual phenomenon in which ciliates of compatible mating types exchange genetic material. While conjugation is sometimes described as a form of reproduction, it is not directly connected with reproductive processes, and does not directly result in an increase in the number of individual ciliates or their progeny. [16]

Ciliate conjugation is a sexual phenomenon that results in genetic recombination and nuclear reorganization within the cell. [16] [14] During conjugation, two ciliates of a compatible mating type form a bridge between their cytoplasms. The micronuclei undergo meiosis, the macronuclei disappear, and haploid micronuclei are exchanged over the bridge. In some ciliates (peritrichs, chonotrichs and some suctorians), conjugating cells become permanently fused, and one conjugant is absorbed by the other. [12] [17] In most ciliate groups, however, the cells separate after conjugation, and both form new macronuclei from their micronuclei. [8] Conjugation and autogamy are always followed by fission. [14]

In Paramecium caudatum, the stages of conjugation are as follows (see diagram at right): 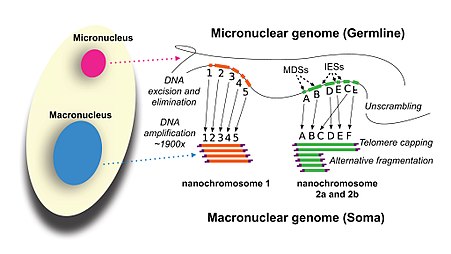 In addition, the micronuclear genes are interrupted by numerous "internal eliminated sequences" (IESs). During development of the macronucleus, IESs are deleted and the remaining gene segments, macronuclear destined sequences (MDSs), are spliced together to give the operational gene. Tetrahymena has about 6,000 IESs and about 15% of micronuclear DNA is eliminated during this process. The process is guided by small RNAs and epigenetic chromatin marks. [18]

In spirotrich ciliates (such as Oxytricha), the process is even more complex due to "gene scrambling": the MDSs in the micronucleus are often in different order and orientation from that in the macronuclear gene, and so in addition to deletion, DNA inversion and translocation are required for "unscrambling". This process is guided by long RNAs derived from the parental macronucleus. More than 95% of micronuclear DNA is eliminated during spirotrich macronuclear development. [18]

Until recently, the oldest ciliate fossils known were tintinnids from the Ordovician period. In 2007, Li et al. published a description of fossil ciliates from the Doushantuo Formation, about 580 million years ago, in the Ediacaran period. These included two types of tintinnids and a possible ancestral suctorian. [19] A fossil Vorticella has been discovered inside a leech cocoon from the Triassic period, about 200 million years ago. [20]

Several different classification schemes have been proposed for the ciliates. The following scheme is based on a molecular phylogenetic analysis of up to four genes from 152 species representing 110 families: [1] 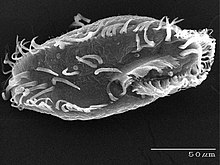 Some old classifications included Opalinidae in the ciliates. The fundamental difference between multiciliate flagellates (e.g., hemimastigids, Stephanopogon, Multicilia, opalines) and ciliates is the presence of macronuclei in ciliates alone. [21]

The only member of the ciliate phylum known to be pathogenic to humans is Balantidium coli, [22] [23] which causes the disease balantidiasis. It is not pathogenic to the domestic pig. [24]